The Kaepernick Of Startups? 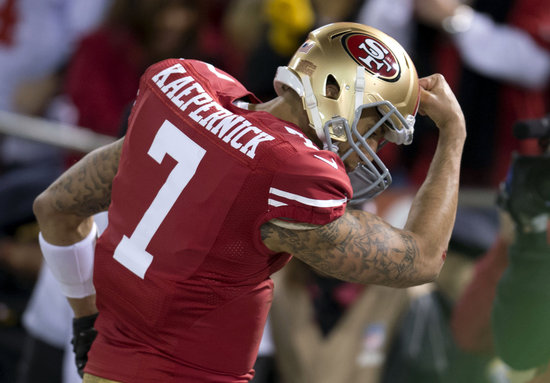 Last year, Alex Smith led the San Francisco 49ers to The NFC Championship Game. They were one (or two) muffed punts from making the Super Bowl. This year, Smith came back and through the first half of the season, he had completed over 70 percent of his passes (which led the league) for over 1,700 yards and had a 104.1 quarterback rating, which was third-best in the NFL. He was on pace to shatter all of his career highs, and at 6-2, the 49ers were well on their way to the playoffs once again and were arguably the best team in football at that point. Smith had just had a game in which he threw three touchdowns and had only one incompletion. One.

The cases were starting to be made for MVP. And then Smith got hurt.

In the 9th game, Smith left the game with a concussion. In stepped backup quarterback Colin Kaepernick. With Smith still not cleared to play the next week, Kaepernick got the start and helped the 49ers destroy the Chicago Bears. And even though Smith was healthy the following game, Kaepernick started every game for the rest of the year.

The old, unofficial rule in sports used to be that you could not lose your job due to injury. In football, Tom Brady probably changed that in the early 2000s when he stepped in for an injured Drew Bledsoe and became, well, Tom Brady. Still, sticking with Kaepernick could not have been an easy choice for 49ers’ coach Jim Harbaugh. He had pretty much single-handedly saved Smith’s career (certainly in San Francisco, if not the NFL). And Smith was just 28. And again, having the best season of his career.

Still, Harbaugh saw something in Kaepernick (whom, unlike Smith, he had drafted). He went with his gut. And now the 49ers are in the Super Bowl.

I’ve been thinking about this situation all week, trying to think of parallels in the startup/tech world. It’s hard to come up with any. And I wonder if there is a Kaepernick situation out there just waiting to lead some startup to greatness.

Obviously, startups and sports are very different. Players are not founders of companies, for example — they’re essentially hired guns. And founders/CEOs typically do not leave positions with injuries. Plus, different entrepreneurs have different skill-sets in different industries — they’re not quite as interchangeable as quarterbacks.

There are plenty of examples in tech of when a founder/CEO has been replaced at the top of the company. Most of the time, such moves happen when things are going badly. That’s usually the case with quarterback changes as well. But sometimes such changes do happen when a company is growing well, but the founders are deemed too inexperienced (Google, is probably the best example here). But that certainly wasn’t the case with the younger Kaepernick replacing Smith.

Reid Hoffman had a great post last week about the hiring of “professional” CEOs at startups. He would know, as he stepped back from the top job at LinkedIn, handing the company over to Dan Nye (who in turn handed the company back over to Hoffman temporarily before LinkedIn finally found Jeff Weiner, who took the company public).

But LinkedIn’s history doesn’t translate to the Kaepernick situation either. As he explains, while the company was going and growing well, it was Hoffman himself who decided he wanted to bring in a CEO to replace him. He benched himself! It turned out to be a brilliant move in the long run, but that would never happen in football.

And, quite frankly, I’m not certain that Larry Page would be replaced by Eric Schmidt in today’s startup world. The current preference seems to be for founding CEOs, pretty much across the board. If a company is going gangbusters, would any investor/board member dare replace a CEO? It’s the same reason you never split two face cards in blackjack — you have a winning hand, why risk it?

And yet, the 49ers did. And they landed two blackjacks.

And so I wonder if there is a situation out there where a startup is going well, but bringing in another young rockstar entrepreneur to lead the team would bring about a truly great company. It is perhaps impossible to know, because such things just don’t happen in the startup world.

Incubators like Y Combinator are known for attracting a massive amount of talented entrepreneurs. Obviously, not all of them succeed. But perhaps one would where they otherwise would not if inserted into the right startup. And perhaps they’d pull off a Kaepernickian rise to elite status.

But again, would any board/investor and/or founder risk such a move within a solid company? Doubtful. Not to mention the Zuckerbergian trend of founders retaining board control, making such a “benching” pretty much impossible. Could you imagine if a quarterback baked into his contract that he could not be benched for any reason?

Instead, we now routinely see investors install strong COOs to help guide young CEOs. A top-tier receiver, if you will (who also happens to be able to play quarterback, if needed).

Sometimes those COOs take control. See: Dick Costolo at Twitter, for example. Sometimes they temporarily do. See: Tim Cook in the times that Steve Jobs was on leave of absence due to his health (perhaps the closest thing we have to a quarterback leaving with an injury). Cook, of course, did eventually end up in charge for good.

What if there is a great, young startup out there that’s just one stellar entrepreneur away from becoming the next horseman of tech? That’s probably a controversial thought, but perhaps it shouldn’t be. Just something to think about as we get ready for the 49ers to destroy the Ravens in a week.